"Jonathan is truly an exceptional human being, as well as one of the most humble, talented, knowledgable, concerned and creative artists with whom I've ever collaborated. He brings to the world of art something uniquely and marvelously his own. With extraordinary technical ability, Jonathan is able to capture the essence of his subject(s) using only a modicum of space, lines and materials."
Top Qualities: Great Results, Personable, Creative


-Curtis Roth
The Philadelphia Phillies commissioned Jonathan to create two mosaic panels for the grand opening of Citizens Bank Park -- one was an 8ft x 6ft portrait of the ballpark and the other, a 6ft x 4ft portrait of Jim Thome. It was a pleasure working with Jonathan. He is extremely customer oriented. He provided us with drawings and ideas along the way and was very open to our input which made the process that much smoother. I would highly recommend Jonathan to anyone looking to have artwork commissioned. His art truly complements Citizens Bank Park, capturing all of its activity and atmosphere.

When SEPTA began planning for the re-dedication of the Cecil B. Moore Station on the Broad Street Line, we wanted an installation that would honor the life, career and legacy of Cecil Bassett Moore, a remarkable Philadelphian and civil rights champion.

Jonathan was the obvious choice for this important project.  His mosaics have a kinetic quality that animates and captures the essence of his subject matter.  He was extremely accommodating throughout the entire process, and his careful appreciation of Cecil B. Moore - the man and his achievements - produced a work of art in which the Moore family, his associates, and the City of Philadelphia can be proud.

Jonathan's mosaic is an example of what public art can accomplish when it is thoughtfully and expertly executed.  It can inspire.  The distinctive mosaic now hangs prominently in the re-dedicated Cecil B. Moore Station where each day more than 7,500 SEPTA riders can learn of Cecil B. Moore's service and sacrifice.

The Bryn Mawr Hospital mosaic is magnificent!  What an exciting piece to add to our environment.  Look forward to thanking you in person, but just wanted you to know how wonderful we think it is!

Andrea Gilbert
President, Bryn Mawr Hospital
130 S. Bryn Mawr Avenue
Bryn Mawr, PA 19010
We have been working with Jon in developing a mosaic that illustrates the history and accomplishments of Bryn Mawr Hospital. Throughout the process I have found Jon to be imaginative, responsive, patient, committed to his work, flexible, open to numerous changes that we suggested (most of which after seeing them were not an improvement over his original ideas). Jon has done exhaustive research into the history of Bryn Mawr Hospital in presenting a final draft of the design of our mosaic. 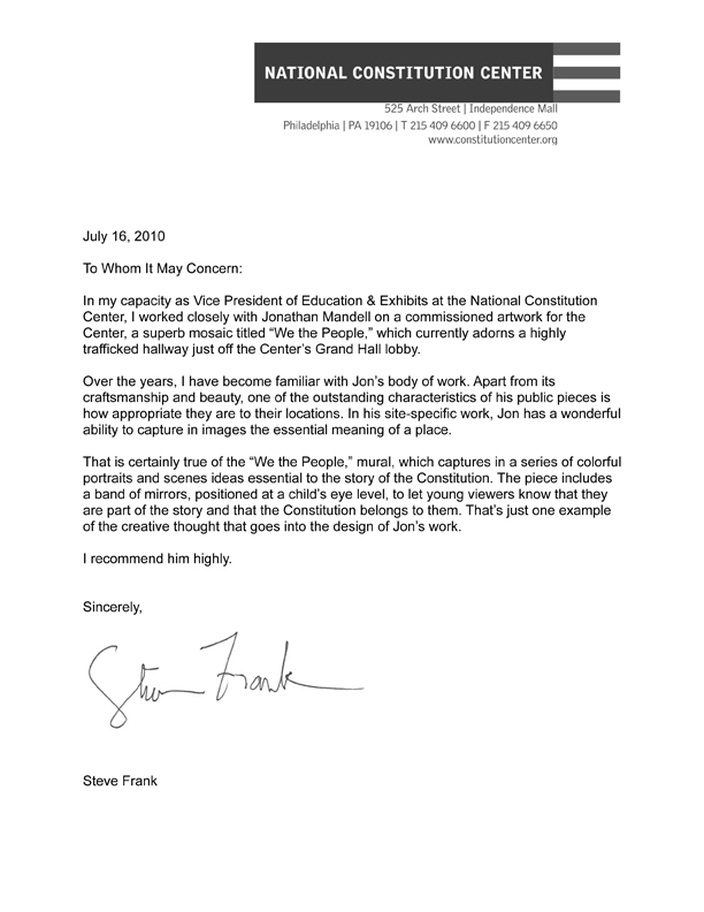 "Choosing an artist to create a fine art mosaic was simply clear cut. Jonathan Mandell’s work is visionary, uniquely distinctive and exactly what we were looking for. His easy going and relaxed demeanor made the design and fabrication process simple and he was extremely cooperative in tailoring his vision to our own. The direct interaction and involvement with the artist was invaluable and he even personally oversaw the delivery and installation aspects of the project through completion.  I would highly recommend the commissioning of his work and it is a prized possession that creates a monumental focal point that we will treasure."

President
WESCO Manufacturing
New York
I first had the privilege of viewing Jon Mandell's fantastic work when he kindly offered to do a tribute mosaic of of my brother, Wilt Chamberlain, in 2001. The mosaic featured Wilt in a basketball game in the gym at Overbrook High School in Philadelphia, PA.

When the life-size mosaic was unveiled, the packed Overbrook High School auditorium was in awe. Jon had captured the body language and facial expression of Wilt and his teammates perfectly and then the crowd attending the "game" was so lifelike, I felt like I was part of the mosaic. It hangs in the auditorium of Overbrook and admired by all and an inspiration to all. I wish Wilt had been there for the unveiling, it was magnificent!!!

Thank you Jon from the entire Chamberlain Family family for your tribute. I have watched the growth of Jon's work since 2001 and have the privilege of his beautiful mosaic he did of my husband, Elzie and myself; it is enjoyed by everyone who enters our home. It has been an honor to watch the development of your art be it sports, music, children, celebrities, etc.,
we are fans forever. 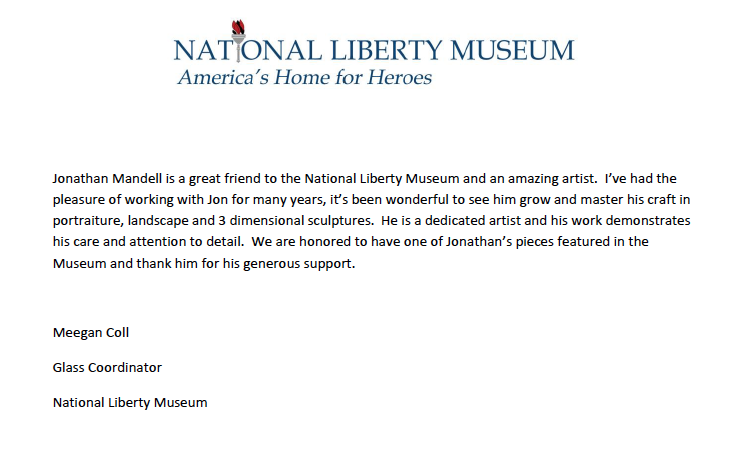 Last year I had seen Jonathan Mandell’s mosaic of The Phillies' Citizens Bank Park on the cover of the Jewish Exponent.  I loved it and wanted to have him create something similar for me that I would put in my office.  I called and met with Jonathan and discussed the potential project.  His approach was thorough, friendly, and totally educational.

Jon is not only an artist, but he is also a student of the fine arts and a meticulous technician.  His attention to details was impressive and fascinating as he explained his process of creating his Canvases.  His use of colored ceramic tiles, semi-precious and precious stones makes his ‘pictures’ sparkle and almost talk to the viewing public.  Through several preliminary sketches my wishes and concept which I conveyed to Jon took shape and my Citizens Bank Park was emerging.  Now Jon was ready to begin placing the many mosaic tiles, big and small and tiny, in the proper places on the 3’X4’ cement board.  After a few months of visits to his studio I witnessed with delight the completion of the work that began 6 months before as a mere idea.  You know it is funny but Jon’s humble but confident touch made me very comfortable and feel very much a part of this work.  I loved it!  Today my Citizen’s Bank Park is on the wall of my office directly across from my desk and I enjoy looking at it all the time…it is alive and full of many memories.

I first saw your Casablanca Mosaic in the Bryn Mawr Film Institute lobby in early June. I recognized it as your work instantly. I love it!! It is really fantastic! I'm a huge fan of Casablanca. I've probably watched it 15 to 20 times. When I look at your mosaic, it gives me the same feeling the movie does. It works on every possible level.

And it has really changed the entire feel of the lobby. It adds a level of sophistication that is perfect for that theater. In fact, the mosaic seems, like the film, timeless. It looks as if the your mosaic could have been there when they first built the theater. Again, I love it!!  I'm a member of BMFI, so I look forward to seeing it often. Thanks for all of the great work you are doing. Philadelphia is very lucky to have you and all of your artwork!